Yesterday, BostInno held its 4th Annual State of Innovation conference at the Westin Boston Waterfront. With its ongoing focus on innovation in the Massachusetts economy and featuring some high-profile keynote speakers including Governor Charlie Baker and Boston Beer Company founder and billionaire Jim Koch, yesterday’s event promised to deliver.

Three of our team were in attendance and share their independent thoughts on the event.

Unfortunately, it seemed to lack the excitement of last year’s conference and failed to project me to the level of inspiration that I was looking for. Feeling somewhat sparsely attended, the event just lacked an overall sense of dynamism, showmanship and cohesiveness around “innovation”. 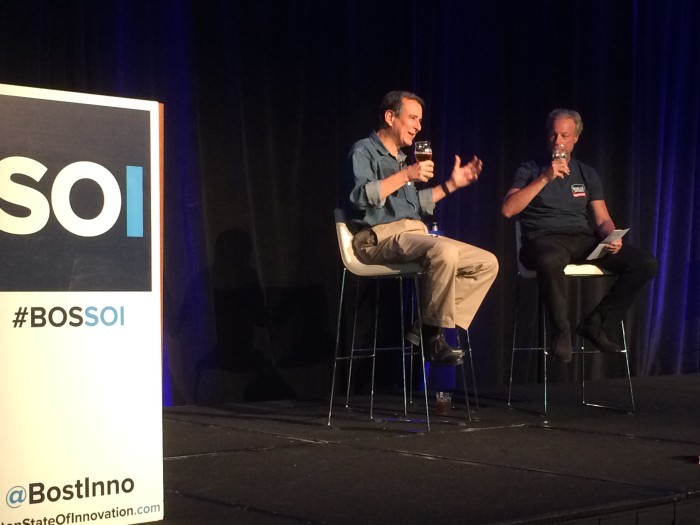 That being said, it did end the day on a high note. The Jim Koch fire-side chat closing keynote was excellent. As much of a success story as any in Massachusetts, Boston Beer Company was built on a shoe-string (they still have $100K of their original $240K of seed money) and largely invented a massive sub-industry of craft beer and breweries that truly disrupted the entrenched heavyweights of Anheuser-Busch and the like.

Deftly peppered with a repartee of engaging questions from General Catalyst founder and managing director David Fialkow (who can throw a t-shirt out to the crowd as well as anyone), the discussion was insightful and honest – particularly Koch’s discussion on the F*ck You Rule at Boston Beer (want to know more, read his book). I loved the fact that he mentioned he was spending Thursday of this week touring the Orlando market with a sales rep there. A CEO billionaire of a $3B company – and he still has his finger on the pulse. The perfect example of a founder-led company.

So what was I looking for yesterday?

Perhaps I missed the sessions where this occurred as I admittedly went for the more nuts and bolts workshop offerings on sales and marketing. But I guess I wanted more Donald Trump-like, over-the-top superlatives and cheerleading on why Massachusetts is the best positioned business and technology ecosystem in the United States, and critical discussion of what we need to do to become even more effective. I would love to have seen a showcase of Massachusetts start-ups and companies that are truly innovative and leading the pack in their respective areas. And maybe, just maybe, some inspirational examples of lesser known, more unorthodox start-ups that are successfully boot-strapping their way to viability (you know, ideas and inspiration that didn’t just originate in Cambridge and get showered with VC dollars).

So, yes – it was a good conference to attend (there was some great networking) but overall my assessment is this – I drove home last night feeling a bit more informed but not overly exuberant. Hope next year is truly more inspirational.

This was my first time attending this event and with the name and the line up of speakers I was expecting a lot of the afternoon. Sadly. it didn’t deliver for me.

Kicking off with Governor Charlie Baker was top notch. I had never seen him speak and his highlights of what is bringing General Electric to our state and how he is trying to set up Massachusettes for the future was great to hear. I loved how off the cuff and comfortable he was with every topic he discussed.

It was refreshing to see so much diversity in the speakers at the event. It wasn’t the typical “all white guy on stage” crowd that is sadly too typical. Whoever was in charge of this aspect of the event deserves a bonus because it was done better than almost any conference I’ve ever attended.

Kudos to #BOSSOI on having such diversity on the stage. Refreshing to see.

The event was well planned, the speakers informative and the sessions I went to were not lacking. What was missing for me was the innovation.

I went in expecting stories of new companies and organizations in our state using technology in new ways. I hoped to see displays of innovations in textiles, healthcare and art-tech. Anything innovative that was happening here and I saw none of that. Where were the scientists, professors and people from outside of the high tech world?

Billed as it was, I planned on more than a typical afternoon of learning. We need an event that showcases all the great work happening in our state since I know it is out there and I hope that next year this event can evolve into that. It is very needed in New England and with all the talk yesterday of letting the world know what is going on in Boston, we’ve got to start right here at home letting all of us know.

The least impressive part of BostonInno’s State of Innovation conference was indeed its name. There was little that was innovative or inspirational. There were no booths filled with cool tech, groundbreaking ideas, prototypes, beta versions, or, really, any booths at all. None of the sessions I attended provided that “wow” moment where I knew I was in one of the country’s most innovative hubs. Even Governor Baker’s speech dwelt on GE moving to Boston — not exactly a bootstrap organization.

That said, it was an entirely enjoyable and productive day. The sessions I attended were useful and fun. I learned about the power of a unified core message, the importance of talking to your customers, and the elements of a solid digital strategy. While much of the workshop content was aimed at junior level staff, the presenters were among the best I’ve seen at similar events.

I have to give a shout out to General Assembly, who trained and provided most of the presenters. They are good.

As always, the most interesting part for me was who I met and talked with. I chatted with VC’s, students, PR pros, marketing experts, entrepreneurs of all types, and a human resource consultant. Their stories and elevator pitches were unique and diverse with only one common characteristic: an energetic devotion to doing cool shit. It’s easy to see why

Boston is taking off as one of the hottest cities for innovation. So maybe the title of this year’s conference wasn’t so bad after all.

We are all planning on attending next year and hope that the event grows and evolves.

Massachusettes has so much innovation going on in all sorts of markets that an event that highlights them is needed.

See what other’s thought and shared throughout the day by following #BOSSOI on Twitter.

Find a Team For Your Projects

Email: info@digaboom.com
©2015-2016 Digaboom, Inc. All Rights Reserved
Made in Massachusetts